With the sheer amount of awful print and TV ads out there, it’s a shame that we’re only covering car adverts. After spending a lot of time researching, we’ve found the very best of the very worst car ads, covering a range of time periods, car manufacturers and countries. So sit back, relax and enjoy the shambolic show of questionable advertising.

Batman, Robin and the Austin Metro

Let’s start off with a bang (or a “pow!”) by watching an utterly ridiculous, Batman-endorsed TV ad for the Austin Metro.

The old school Batman TV series looks ridiculous enough as it is, but just to add to the the whole silliness of it, the superhero duo break character and decide to hop into Batman’s latest piece of futuristic evil-defeating tech, an Austin Metro! Isn’t Bruce Wayne meant to be a billionaire? Anyway, at the end of the ad, we’re given a quirky slogan: “When you’ve got to…(weird long pause)… pick up a penguin, Metro gets you going”. Was that a punchline for a joke we all missed or are they just getting paid by the people who make Penguin biscuits? If so, that wouldn’t be the weirdest thing about this advert.

Next up, a series of image ads accidentally released by the marketing agency hired by Ford India. 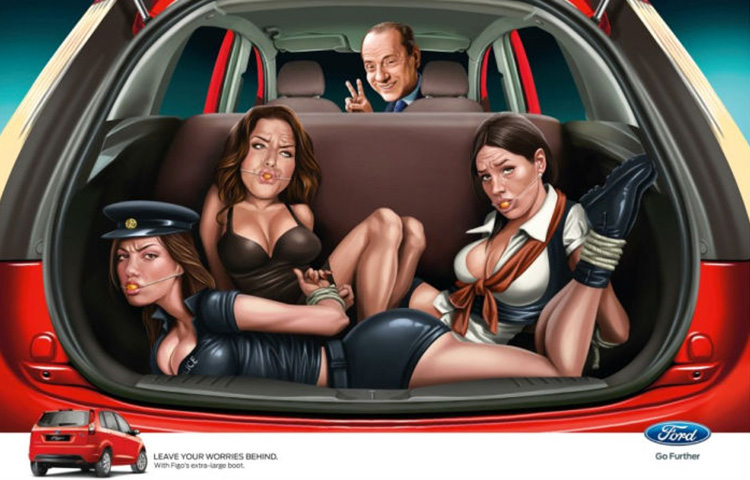 As you can see straight off the bat, there do appear to be some female exotic dancers that have been tied up in the boot. But, what you might miss is the fact that Mr Berlusconi (former Italian prime minister with a history of sex scandals) is the person behind the wheel with a big grin on his face. Not only is it ridiculous that they ever thought this sexy satire cartoon drawing would be a suitable advert for Ford, but it’s also quite an obscure reference for people living in India, somewhere not even close to or linked to Italy. Just like if Ford UK did an advert commenting on a scandal in India, I don’t think many of us would get it…

Next is a similar image with Paris Hilton kidnapping the Kardashians, who were posing a threat to her reality TV show dominance, at the time. And the final of the 3 images shows Michael Schumacher with 3 of his opponents, that you may recognise, tied up in the boot. Here’s an ad full of terrible audio dubbing and a script that makes no sense. But it stars Fernando Alonso so they thought it would balance it out.

This raises so many questions. Is Alonso talking to a psychiatrist? Who enjoys going to the supermarket as a leisure activity? Why is he driving his car inside the supermarket? Why is his voice dubbed when he can speak great English? Why was the “read in a quiet place” joke only added into the UK version of the ad? Honestly, most of us could have written a better advert than this. It doesn’t take a qualified creative to know that this advert is so bad, most people probably changed channels as soon as it came on.

Another print ad for you, which was made back when ads were actually printed, is this from VW.

See what’s wrong? Perhaps the suggestion that women can’t drive? That’s right, this ad is from another time where professional creative advert designers knew that poking fun at the fairer sex would be an effective marketing strategy. However, looking at this today makes you think someone photoshopped this and it’s fake, but no, this ad really did exist not that long ago.

Now, we’ve had loads of car ads, so let’s change the pace with an advert for apple juice!

It’s one of those ads where you have no idea what it’s selling until the very end. What’s great about this ad is that it is memorable. The bad thing about this ad is that it’s only memorable for being stupid, cringey and just plain awful. Trying to be quirky and original by having people sing and dance about apple juice, only to reveal at the end that it’s actually a Toyota ad for their ever-ugly Corolla didn’t work as well as they had planned. It was so bad, Saatchi and Saatchi almost lost Toyota as a client for creating this abomination of TV advertising.

From a broadway-themed song and dance about apple juice, to a country song about Ford being for tough guys. Here is one of the best ones on the list, in my opinion.

Famous country singer Toby Keith puts on a macho display to advertise Ford trucks and how manly and patriotic they are. This is particularly hilarious thanks to how cliche their idea of manliness is. The director just thought “let’s get a bunch of big strong-looking men and have them lift heavy objects and hold power tools in a construction site” and that’s exactly what happened. Mix that in with Toby Keith singing about how he’s on time for work and puts a lot of sweat into the job at hand and you’ve got a great Bob The Builder parody that also advertises Ford trucks.

With those shots of his glorious fist pump and a slogan as strong as “Ford tough”, who wouldn’t feel pressured into buying one of their pickups, even if it is just to prove your masculinity and that you love your country.

Another horror show from Metro, this time featuring Michael Barrymore being very weird.

This ad is so bad, it’s hilarious, I love this ad! It’s like he’s trying to entertain his 2 year old niece at a family gathering. Comedy gold! Definitely not cringey.

I’ll admit, it has its moments that got a chuckle from me, but the other 90% of the video is full of cringeworthy punchlines and pretty bad acting. For some reason, you keep watching, hoping for a redeeming joke that will actually make you laugh, but it never comes…

Lastly, this one isn’t a car ad but it is F1 themed.

Michael Schumacher and  some F1 engine noises star in this shampoo advert to tell viewers that L’Oreal is the secret to Schumi’s perfect hair. The ad appears to be an English German hybrid with a mixture of German narration, Schumacher speaking English and German on-screen text, making you wonder where exactly this ad was meant to air?

Also, after many shots of Michael running his fingers through his perfect hair, he ends up putting a helmet on, defeating the purpose of the whole advert. But the highlight of the clip has got to be the over-the-shoulder pose he gives at the end, whilst saying the slogan and giving his best winning smile like a kid on photo day.

So what have we learned? Even adverts that cost companies millions to produce can end up backfiring. No amount of planning will guarantee how the public react because making adverts is an unpredictable game.