Creating a family-oriented car can be harder than you might think; you have to toe the fine line between functional and risking being perceived as not exciting – boring in fact.

Catering for the mass consumer rather than the car enthusiast is a tough task to take on. Remember the Almera? If you can interest both sides of the market then you are surely on to a winner. Audi has teased us with various concept ideas for the e-Tron over the past year, including the Aicon inspired PB18 sports car which we covered recently here. But this e-Tron SUV will be more than just a concept – surprising as it may sound, this actually will be the first production electric vehicle from Audi; and it looks pretty good.

In fact, I’d go as far to say that this is one of the best looking ‘ordinary’ electric cars out there, the side profile looks modern, sporty and yet understated all at the same time – something you could easily add to your company car list, yet will still turn heads in the car park. 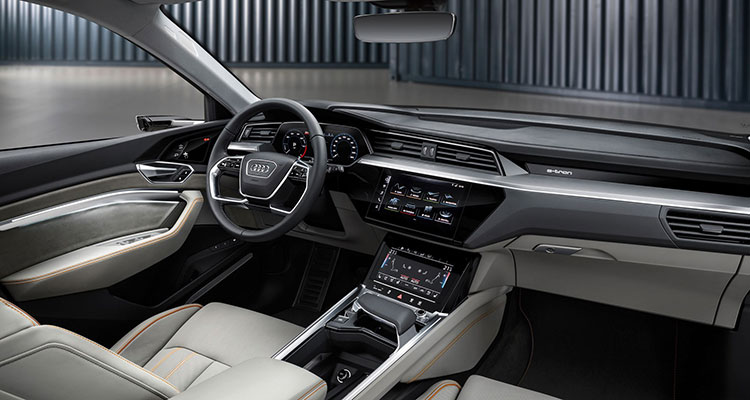 Audi aren’t intending to alienate anyone who has already subscribed to the Audi ideal either, as the interior looks like, well, an Audi. The motor company describe the interior dash layout as a black-panel layout, with numerous understated touchscreens and a double decker set of screens on the centre console.

There are hints towards the next wave of modern vehicles in the e-Tron SUV, with the exterior mirrors replaced by cameras and a radically redesigned gear shifter knob. Those camera-mirrors reduce the width of the car by 15cm without of course any compromise to space, and they feed two door-mounted interior screens. They will also decrease drag factor and thus improve fuel economy slightly too. The e-Tron SUV will feature two electric motors producing 135kW and 140kW respectively, with the former at the front and the latter at the rear. A six second boost for safe overtaking will see the rear increase to 165kW. The e-Tron will get from 0 to 60mph in 6.4 seconds, with the temporary boost mode shaving about a second off that. Though probably the most important figure for everyday family life is how long it takes to charge, and Audi say that the e-Tron SUV will be able to reach an 80% charge in just 30 minutes. The e-Tron has a trickle charging option included for overnight charging in approximately 8.5 hours. A faster Charging System Connect will speed this up to around 4.5 hours.

Lock yourself in to the Audi e-Tron Charging Service and you can take advantage of the peace of mind of being able to charge your vehicle away from home. The e-Tron Charging Service plans to address compatibility issues across Europe and gives the e-Tron driver the hassle-free option of using one specific charge card for all e-Tron charging points. Audi says this scheme will give access to around 200 operators across 16 different countries, which in reality will offer around 65,000 charging points (AC and DC). First year’s subscription will be free, but we wait to hear what the cost will be following that initial year. You will be pleased to hear that production has already started and first deliveries should commence in 2019. The intention is to ramp up production to around 200 vehicles per day which suggest that Audi are very confident about the e-Tron SUV. It won’t be cheap though at £70,800