In 1976 it seemed that David Bowie’s life was falling apart; the destructive trappings and excesses that rock stars can be so susceptible to were beginning to overshadow his burgeoning fame and fortune. To escape the drugs and his tax issues, Bowie left California for the clean, pure air of Switzerland. A fresh start that would see the release of the renowned Berlin Trilogy in a remarkably creative three-year period. Here he set up a home that would remain his main residence until 1982.

Fast-forward to late 2017 and Switzerland is again the location for an intriguing insight into Bowie’s life; on December 29 the car once owned by David Bowie was to be auctioned – and the amount of money it would make could have probably swept aside some of the rock star’s 1976 money issues in one fell swoop. The 2.6-litre V6 powered 1981 Volvo 262C was a luxury coupé based on the 200 Series, with the drivetrain, floorpan and suspension being taken directly from the 260 sedan – all under the experienced watchful eye of Gruppo Bertone in Turin. The car featured electric windows, central locking and electric mirrors as well as an early version of cruise control and air conditioning. Not too bad for a car from the early eighties. Only 6,620 models of the Volvo 262C were produced making it rare enough on its own, but a copy of the original service booklet and the original registration document with the name ‘David Robert Jones’ had auction house Oldtimer Galerie hoping that the car would fetch in the region of 65,000 Swiss francs (around £49,000). The luxury Volvo 262C also features leather seats and a full set of alloy wheels. It was designed by Bertone and Volvo to compete with the likes of the Cadillac Eldorado specifically in the American market – although this particular model was delivered to Bowie’s Swiss residence in the summer of 1981. Extras specified for Bowie’s car included Blaupunkt speakers as part of the Volvo hi-fi system and a 3-speed transmission. With just 33,000 miles on the clock and the car in fine original condition, the huge selling price is starting to sound quite reasonable for a David Bowie fan looking for something unique to treasure. 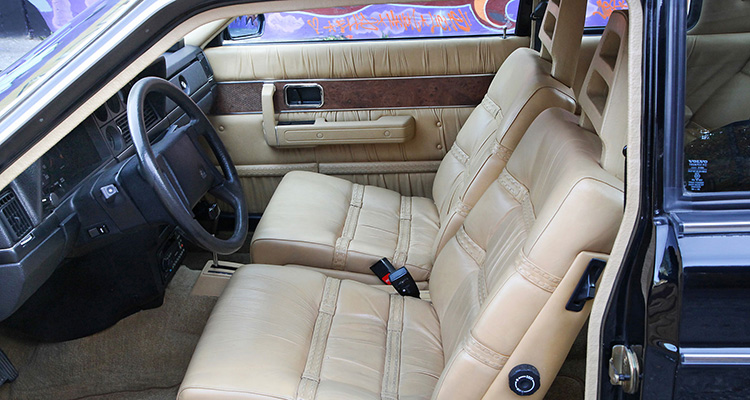 Oldtimer Galerie’s brochure description of this very special Volvo read: “For admirers of the exceptionally talented David Bowie, this Volvo 262C certainly offers a unique opportunity to own a small part of pop history and the geniuses’ life.”