Car manufactures spend a small fortune on getting their products placed in the right places at the right time; an advert reaching the right audience can be worth millions in sales. Imagine how many more sales Aston Martin have achieved through affiliation with the James Bond franchise… Jaguar must be feeling a little of that Aston-satisfaction after their Jaguar E-Type Concept Zero was the Royal Wedding car of choice as Prince Harry and Meghan Markle sped away to the evening reception at Frogmore House in the beautiful open top. 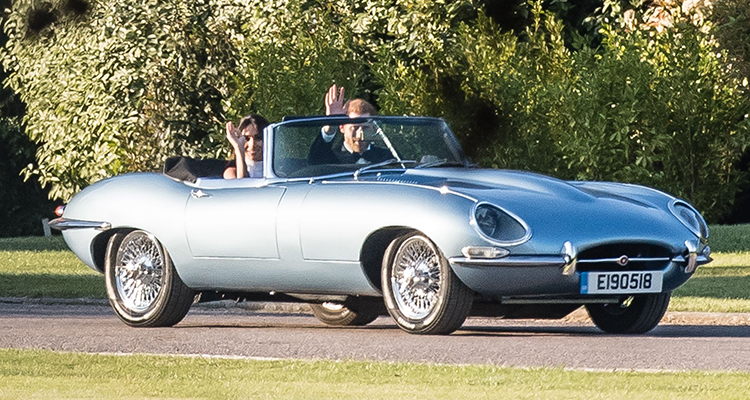 Having watched the entire wedding and listened to endless pre-wedding speculation about ‘the dress’, when the participants began to arrive I naturally found myself looking at the cars, and being rather surprised to see the groom and best man arrive in a rather ordinary looking people carrier. Although the Mercedes Benz V-Class was merely employed to bring the Royals close to the church rather than direct to the door, allowing them to walk the route themselves. Car-wise, the best was yet to come. 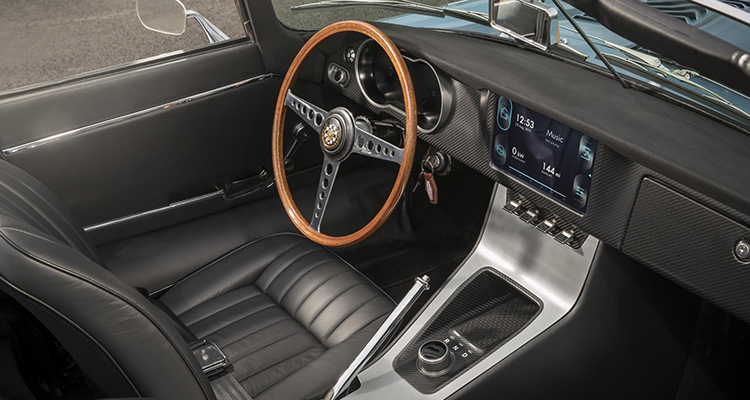 Of course, the weather helped marvellously. A great occasion was visually helped in every way possible by probably the most perfect weather imaginable. The flowers adorning the door of St George’s Chapel at Windsor Castle remained pristine and there were no umbrellas hiding the celebrities from our traditional rain – and the E-Type Concept Zero was able to show off it’s beauty – and happy passengers – with the roof down. 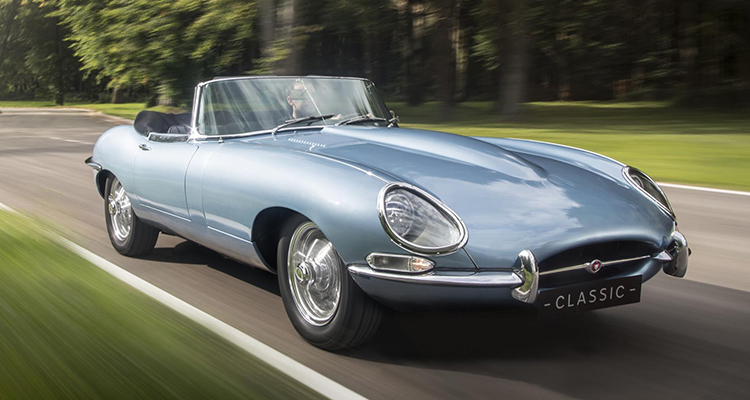 We have known about the Jaguar E-Type Concept Zero for some time now of course, but the Royal Wedding has got everyone talking about it once more. Jaguar has been very shrewd with the car’s design – by simply deciding not to change it. The car looks like an E-Type because it is an E-Type, but it’s what is housed in place of the famous XK inline 6 that makes it special. A lithium ion battery pack is a direct replacement for the engine in the Concept Zero, and thanks to being almost the same weight, we can expect handling to be pretty familiar to anyone that has driven the traditional E-Type. With the motor and transmission sitting just behind the engine and powering the rear wheels, I wonder if there is much difference at all in corner handling. Maybe the lack of a traditional Jaguar roar when starting up the engine is the only thing that gives it away. 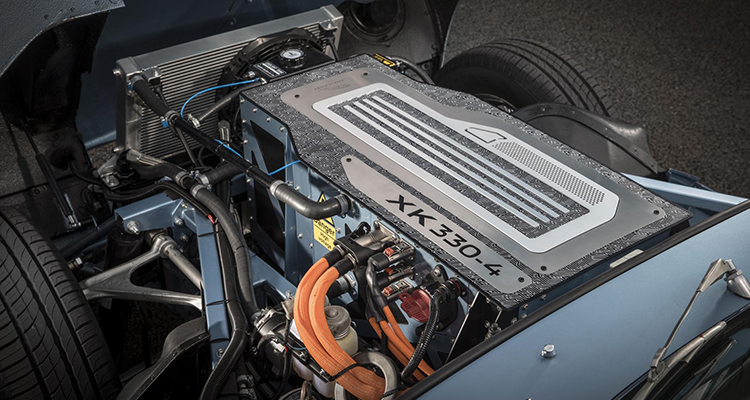 Time moves on of course, and if Jaguar had not developed the E-Type Concept Zero then they would have eventually found themselves falling behind their rivals. As it is, a reveal at the 2017 Jaguar Land Rover Tech Fest in London created enough interest and clamour the convince Jaguar that they were on the right track – and then a Royal Wedding. I am sure there was extra manpower on the phone lines that night. Having once worked in a marketing company that took incoming calls for Jaguar I know how this works; you get your training, you sit and wait – then the silence is broken by a stream of interested souls seeking information about a car they probably were not aware of ten minutes prior to the Royal couple leaving for the reception. 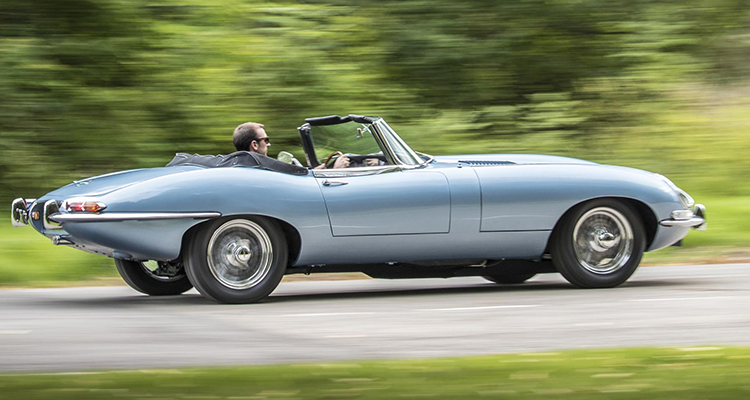 If anyone out there still has doubts about electric vehicles, it should be noted that the E-Type Concept Zero is actually faster than the original E-Type with a 0-62mph in just 5.5 seconds thanks to the advanced powertrain (which is actually a modified version of what will be seated inside the future I-PACE model). So what of that electric ‘engine’ then? Well E-Type Concept Zero has its own unique 220kW powertrain and an approximate range of around 170 miles. A range much less than more family-oriented electric vehicles are appearing with these days, but this is not a people carrier… 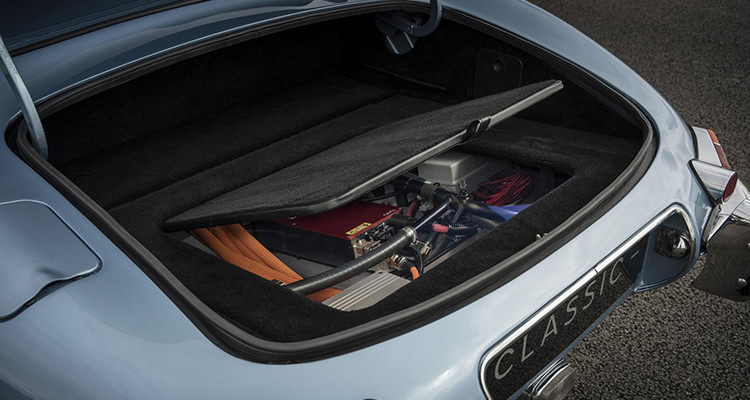 The Concept Zero Royal car of choice is based on a 1968 Series 1.5 Jaguar E-Type and Jaguar says that it handles just like the original classic sports car – which is fantastic news. Interestingly, because the powertrain is, more or less, a drop-in replacement for the classic XK engine, it does mean that any Jaguar vehicle from within the period of time that used this engine (which was in production from 1940 until 1992) could potentially be converted to electric according to Tim Hanning, Director of Jaguar Land Rover Classic. That includes the E-Type of course, plus XK120, XJ6 and MK2 models. 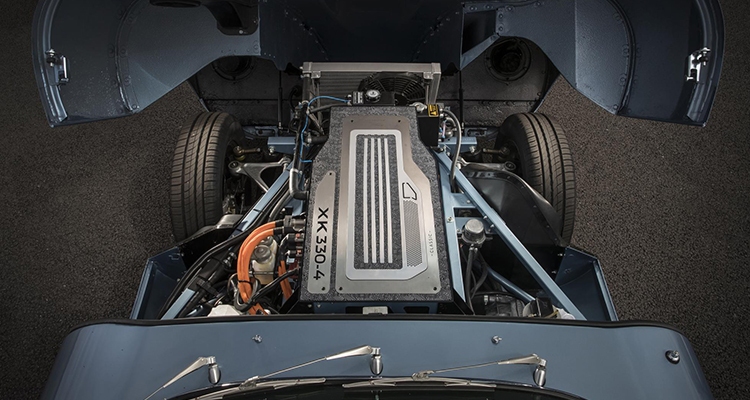 Jaguar haven’t commented on likely conversion costs as yet, but there will surely be quite a few owners who will be interested to hear the news as fossil fuels surely will be nearing the end of their long and dusty road in the not so distant future. 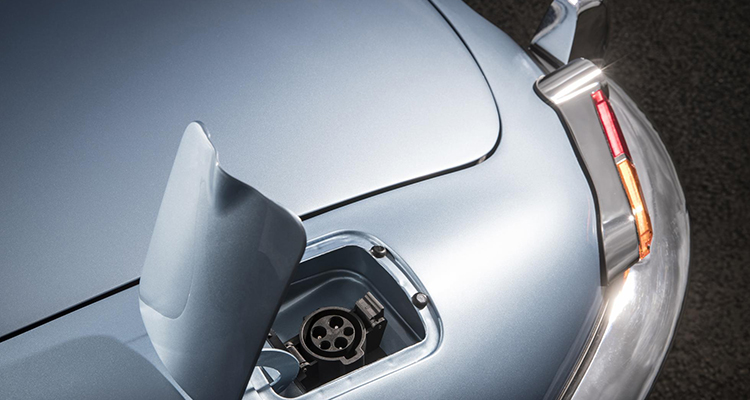 Oh and one final note; as the couple sped off at 7.20pm on Saturday 19 May a few observant people noted the steel blue Jaguar Concept Zero’s rather special number plate, which read: E190518 – the Royal Wedding date, and forever the Royal couple’s anniversary. I wonder if they get to keep the car… 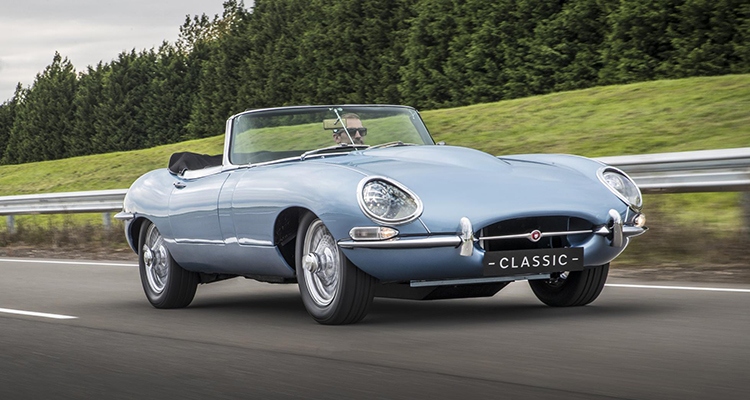