McLaren has developed a fascinating knack for constantly bettering itself recently.

At the back end of 2017, it revealed the Senna – the most extreme car in the brand’s three-decade history. And less than 12 months later, it’s at it again with the Speedtail – which has stolen the title of the most out-there McLaren yet. It uses a petrol-electric hybrid powertrain with a combined power output of 1,035bhp that can get it to 186mph from a standstill in 12.8 seconds. For context, the McLaren P1 took 16.5 seconds to hit that speed. 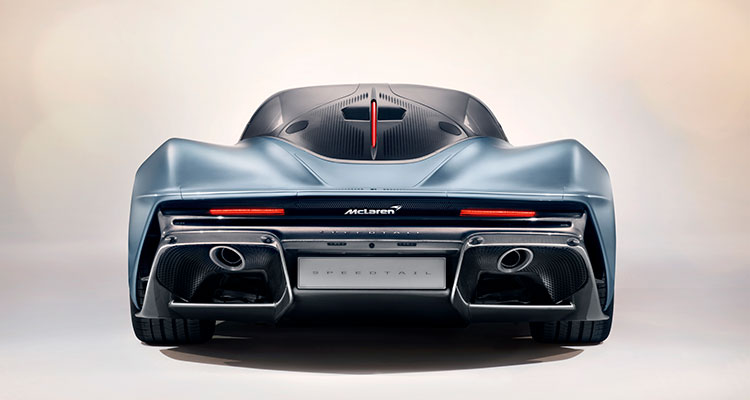 From there, the Speedtail will keep picking up pace until it hits 250mph, making it the fastest McLaren to date and quicker than the record peak speed of the legendary McLaren F1 (243mph) – so it’s understandable why McLaren would call it their ‘ultimate road car’.

Not only is it the most powerful McLaren ever, it is also the most aerodynamic, with every body panel on the Speedtail being made of carbon fibre and sculpted to reduce drag. Its aerodynamic performance is further aided by the fact that traditional door mirrors have been replaced by retractable digital rear-view cameras. The Speedtail is narrower than a P1 but more than half a metre longer, stretching for 5,137mm (almost 17 feet) from nose to tail.

Inside, the car’s cabin fuses contemporary craftsmanship and cutting-edge innovations to achieve the kind of elegance more accustomed to high fashion, luxury yachts and bespoke furniture than an automobile. Only three seats feature in the Speedtail with the driver positioned in the centre with the passengers placed either side behind them. This is intended to give the driver an unparalleled sense of space and a perfectly balanced view out of the windscreen.

The Speedtail represents the first of 18 new cars or derivatives set to come from McLaren as part of its Track25 business plan.

Only 106 Speedtails will be built and all of them have already been spoken for, selling for £1.75 million each.

What do you think of the Speedtail? Let us know down in the comments.