The BMW Concept X2 was originally unveiled at the Paris Motor Show in October this year and BMW have announced that the production model of the compact X2 SUV will remain largely unchanged from the original vehicle shown in Paris. More often than not a concept vehicle will allow designers the freedom to include a few outlandish ideas to attract the eye and the attention of the media.

We have come to accept that come production time, much of these ideas will either be heavily watered down or disappear completely.

Take the Nissan JUKE for example; going with the original launch concept idea of a vehicle that could be used for beach activities the interior was almost entirely wiped down with stylish but uncomfortable looking wipe clean bucket seats.

not for a moment did we expect these to make it to production. So some credit to BMW needs to be given here. When will it be released?

Heralding the new range of BMW models, which will include an entry-level model called the BMW X1 Sport Cross, aiming to pitch itself as a direct competitor to the JUKE.

At the top of the pile will sit the X7. 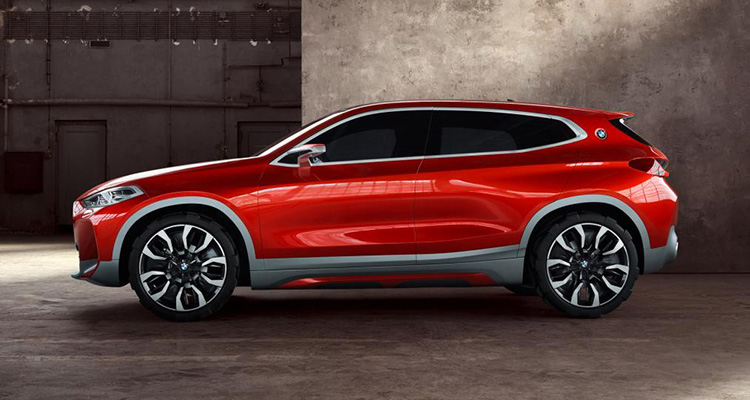 One of the elements of the X2 concept that is very likely to stay is the rather unique twin kidney grille design and the vehicle profile itself with that sporty sloping roofline.

It would be very nice to see those headlamps remain along with the larger wheels as well. The X1 and X2 will in fact share the same turbocharged 4-cylinder petrol and diesel engine options – and expect to see the X2 kitted out with xDrive, BMW’s 4WD system giving power to every wheel when it’s required and able to split the power between the front and rear axles by up to 100% to either. Further down the line, there will potentially be an upgraded version of the BMW X2 likely to fit in with the company’s M Sport series.

If this is correct, we can possibly expect the X2 M Sport to feature a leather interior and aluminium trim plus an uprated 2.0-litre engine, possibly a 6-cylinder. With the X1 priced just under £30,000 we can expect the X2 to cost somewhere just above.