Held against the backdrop of what is regarded by some as Britain’s greatest palace, Blenheim Palace in Oxfordshire, the event presents arguably the finest collection of supercars, hypercars and classic cars in the world.

Of course, there’s other stuff going on like the luxury retail village, but we’re here for the cars. So which automobiles stood out at 13th annual Salon Privé Concours d’Elégance?

As in previous years, a whole raft of awards were handed out to the most remarkable cars on display and claiming the top ‘Best of Show’ prize was a 1933 Bugatti Type 55 Roadster, styled by Jean Bugatti.

It is considered to be the world’s most original Type 55 Roadster, as it is the only unrestored example with less than 50,000 miles on the clock.

A 1973 Ferrari Dino 246 GTS may have won the ‘Preservation at its Best’ award, but there was another Dino that attracted plenty of attention: a 1972 Dino 246 GT, once owned by Herman’s Hermits frontman Peter Noone.

The voice behind hits like ‘I’m Into Something Good’ and ‘No Milk Today’ was so desperate for a metallic purple Dino that he had the car painted from ‘Argento Auteuil’ to ‘Viola Dino Metalizzato’ as soon as he got the keys – it retains this stunning colour today.

It wasn’t all heritage automobiles at Salon Privé – the event was the first in Europe to see the new Lamborghini Aventador SVJ. 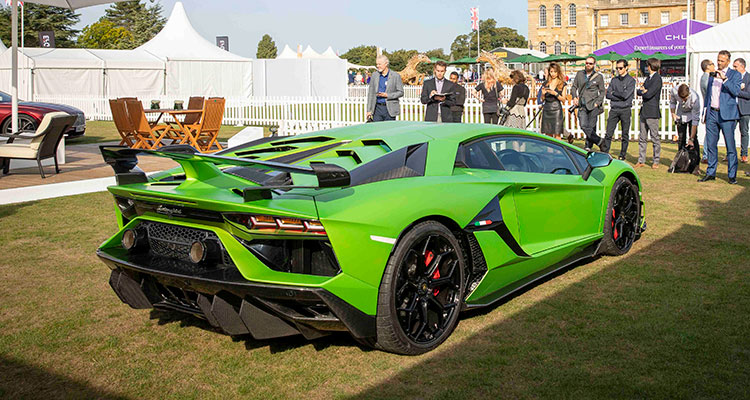 Powered by a 759bhp V12, it is the fastest and most powerful Lambo in production, polishing off a 0-62mph sprint in a phenomenal 2.8 seconds with a top speed exceeding 217mph. Read more about it here.

It’s no surprise to see Bentley getting involved in such a prestigious, high-end event and the luxury car maker brought along a ‘Rubino Red’ Continental GT with Mulliner Driving specification. This special trim adds Hotspur & Beluga-split interior and dark Fiddleback Eucalyptus for a veneer finish.

Riding on 22-inch black and polished edge alloy wheels, it is the most advanced Bentley ever with a new 626bhp six-litre twin-turbocharged W12 engine that is good for 0-60mph in 3.6 seconds.